I've Got You Under My Skin (with Harmony)

by The Vocal Chords 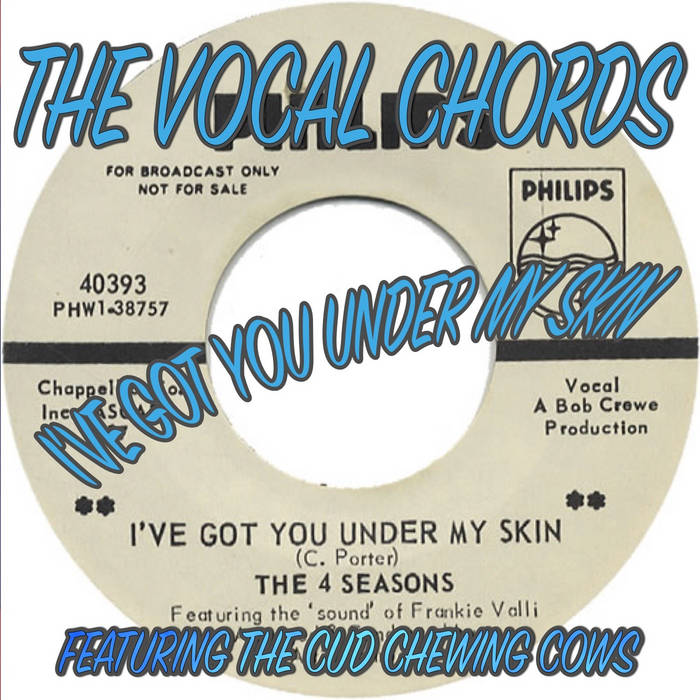 
I've Got You Under My Skin

"I've Got You Under My Skin" is a song written by Cole Porter. Written in 1936, the song was introduced in the Eleanor Powell MGM musical Born to Dance, in which it was performed by Virginia Bruce. It was nominated for the Academy Award for Best Song that year. It became a signature song for Frank Sinatra and, in 1966, became a top 10 hit for The Four Seasons. The song has been recorded by many leading pop artists and jazz musicians over the years.

Frank Sinatra first sang the song on his weekly radio show in 1946, as the second part of a medley with "Easy to Love". He put his definitive stamp on the tune ten years later, in a swinging big-band version that built to successive climaxes on the back of an arrangement by Nelson Riddle. Riddle was a fan of Maurice Ravel, and has said that this arrangement was inspired by the Boléro.[1] Sinatra aficionados usually rank this as one of his finest collaborations with Riddle's orchestra. An insistent saxophone section propels the chart which climaxes in a startlingly out-of-control slide trombone solo by Milt Bernhart. Appreciating the excitement of the arrangement, Sinatra usually included the song in his concerts thereafter—a tradition carried on by Sinatra's son, Frank Jr.[2]
Sinatra re-recorded "I've Got You Under My Skin" for the album Sinatra's Sinatra (1963), an album of re-recordings of his personal favorites. This time the trombone solo was by Dick Nash because Bernhart was booked for another session.
A live version of the song also appears on the 1966 album "Sinatra at the Sands" featuring Count Basie and his orchestra.
In 1993, Sinatra recorded a version as a duet with Bono of U2 for the album Duets. It was also released as a double A-side single with U2's "Stay (Faraway, So Close!)", and a music video was directed by Kevin Godley. The song was in the movie What Women Want the character Darcy played by Helen Hunt is singing along with the song.

Neneh Cherry's hip-hop interpretation of the song was the lead single for the Red Hot + Blue charity album, and reached number 25 in the UK Singles Chart. The music video was directed by Jean-Baptiste Mondino.

Neneh Cherry replaced most of the lyrics with a rap on AIDS victims and how society reacts to them. Of the original Cole Porter lyrics, she kept only the first four lines and "Use your mentality, wake up to reality".

In 1952, Stan Freberg produced a parody of the song.
In 1977, in The Muppet Show episode 119, Behemoth eats Shakey Sanchez and they then sang this number, with Shakey still alive in Behemoth's mouth.
In 1993, The song was used in The Flintstones' movie I Yabba-Dabba Do!
In 2004, The song was used in the Treehouse of Horror XV episode of The Simpsons
The film Gamer includes the Sammy Davis Jr. version of the song in a musical number in which Ken Castle, the villain (played by Michael C. Hall), lip-syncs it to show he has the ability to control people with technology.
In Star Trek: Deep Space 9, a holographic version of Vic Fontaine sings this song during Odo and Major Kira's first date in the episode "His Way"
Tyreese, a character from The Walking Dead, sang this song to his girlfriend in the second episode of Season 4.
Sinatra's version is played during the opening sequence for the 2015 video game Batman: Arkham Knight during the cremation of The Joker.
In the M*A*S*H episode, George, Captain John "Trapper" McIntyre sings the song during an operation.

1 Jump up  ^ Levinson, Peter J. "September in the Rain: The Life of Nelson Riddle", via Google Books, p. 129.
2 Jump up  ^ Obituary: Milt Bernhart, trombonist who got under Sinatra's skin, The Guardian, London, 4 February 2004


“I’ve Got You Under My Skin” Video directly

I'd sacrifice anything come what might
For the sake of havin' you near
In spite of a warnin' voice that comes in the night
And repeats, repeats in my ear:
Don't you know, little fool, you never can win?
Use your mentality, wake up to reality.
But each time that I do just the thought of you
Makes me stop before I begin
'Cause I've got you under my skin.

I would sacrifice anything come what might
For the sake of havin' you near
In spite of the warning voice that comes in the night
And repeats - how it yells in my ear:
Don't you know, little fool, you never can win?
Why not use your mentality - wake up, step up to reality?
But each time I do just the thought of you
Makes me stop just before I begin
'Cause I've got you under my skin.
And I love you under my skin.