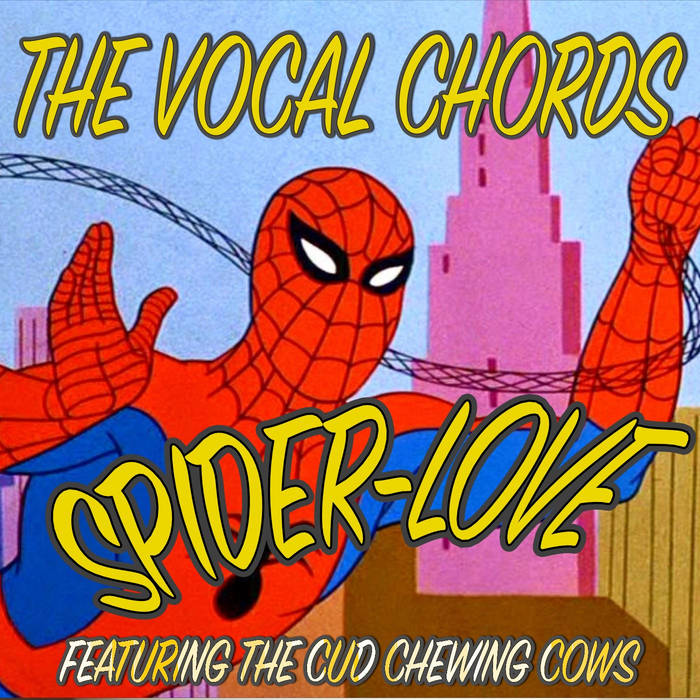 "Spider-Man" is the theme song of the 1967 cartoon show Spider-Man, composed by Academy Award winner Paul Francis Webster and Robert "Bob" Harris. The song's opening lines, "Spider-Man, Spider-Man, does whatever a spider can," have become as synonymous with the Marvel Comics character as his costume.

The original song was recorded at RCA Studios in Toronto (where the cartoon was also produced) featuring 12 CBC vocalists (members of the Billy Van Singers, and Laurie Bower Singers groups) who added to the musical backing track supplied by RCA Studios, New York. The singers were paid only for the session and have had no residuals from its use since then.

The Vocal Chords web site - www.vocalchords.ca or vocalchords.ca
Downloads are available on each albums’ page on our site

The Vocal Chords CD's and/or The Cud Chewing Cows CD's are available at Amazon
amzn.to/2wj4IyQ

A long-standing rumor claimed that the bassline for the Spider-Man theme was performed by jazz musician Charles Mingus; however, Ralph Bakshi confirmed the rumor as being erroneous, stating that Mingus did not perform on the theme song.

The 2002 Spider-Man and Spider-Man 2 film adaptations have featured characters as buskers performing the song; Jayce Bartok and Elyse Dinh respectively. Both films also feature the song at the very end of the credits: the 2002 film featured the 1967 version, while the 2004 film featured a re-recording by Michael Bublé (see below). 2007's Spider-Man 3 also featured the song's melody during the scene where Spider-Man arrives at a big celebration. In The Amazing Spider-Man 2, Peter has the theme song in his phone as a ringtone and whistles the tune while defeating Aleksei Sytsevich.

• "Spider-Man Theme" was covered by Canadian crooner Michael Bublé, and included on his first independent album, BaBalu, released in 2001.[2] The track was later chosen for inclusion in the film Spider-Man 2, and thus, was released as a single on July 26, 2004. It also appears on certain special editions of Bublé's self-titled debut album, Michael Bublé.
• Aerosmith covered the song for the soundtrack of the 2002 film adaptation, albeit with altered lyrics. It should also be noted that Aerosmith lead guitarist Joe Perry performed a new theme song for the 1994 Spider-Man cartoon, playing the lead guitar track and speaking lyrics through a vocoder that loosely referenced the 1967 theme, specifically the line "Spider-Man, Spider-Man, radioactive Spider-Man" and references to "radioactive blood" (changed to "radioactive spider blood" for the 1994 theme). The guitar riff was also based on the melody of the original line "Spider-Man, Spider-Man".
• Apollo 440 covered the song for the 2000 Spider-Man video game, developed by Neversoft for PlayStation, Dreamcast, Nintendo 64 and PC. This version also sampled the original.
• The punk band The Distillers have also recorded their own unique version for the Spider-Man 2 console game which was featured in the end credits along with "Beat Your Heart Out".
• In the 1992 video game Spider-Man and the X-Men in Arcade's Revenge for the Super NES and Genesis, a distinct musical reference to the first line of the song can be heard at the 1:50 mark in the music for the levels featuring Spider-Man.
• Brian May reinterpreted the theme for the 1995 BBC Radio 1 serial.
• Moxy Früvous in the 1993 album Bargainville.
• The Mr. T Experience on their 1989 album Big Black Bugs Bleed Blue Blood.
• Gilman Street punk band Stikky on their 1988 EP Cuddle.
• Ramones as a hidden track in the vinyl version of their 1995 album ¡Adios Amigos!, their 1996 album Greatest Hits Live, the compilation, Weird Tales of the Ramones (CD 3), as well as their last live performance We're Outta Here!. It also appears on the alt-rock compilation Saturday Morning: Cartoons' Greatest Hits, and appears in Guitar Hero: Warriors of Rock. The song is featured in the comedy film Bio-Dome as well. It was used in a television commercial for Spider-Man toys in Australia.
• Nintendo of America also parodied the song in a Bomberman 64 commercial during the 1997 holiday season.[3]
• In The Simpsons Movie, Homer Simpson is seen walking a pig on the ceiling singing "Spider-Pig, Spider-Pig. Does whatever a Spider-Pig does. Can he swing, from a web? [Pause] No he can't, he's a pig. Look ooooooouuuut! He is a Spider-Pig!" A choral version is in the closing credits, part of which appears in Homer's epiphany.
• On the syndicated radio program, The John Boy and Billy Big Show, a recurring segment called Married Man (the saga of a henpecked husband and second-rate superhero) uses a parody of the Spider-Man theme as its theme song.
• In the game Marvel vs Capcom 3: Fate of Two Worlds (and its updated version, Ultimate Marvel vs Capcom 3), Spider-Man himself makes several references to the song, such as "Look out, here comes the Spider-Man!" being one of his pre-fight quotes, and "Does what a Spider can!" being one of his taunts against an opponent.
• The Mexican group Fuego Indio recorded n Spanish version although this version only mentioned Spider-Man and his Spanish name Hombre Araña. This version appeared almost on par with the 2002 film.
• Jazz Trumpeter Woody Shaw recorded the theme on his album Setting Standards and titled it "Spiderman [sic] Blues," not to be confused with the Bessie Smith tune titled "Spider Man Blues"
• Big John Bates covered the song on his 2001 debut Flamethrower in a surf version titled "Surfin With Spidey".
• A snippet of the song can be heard in the main theme of the Ultimate Spider-Man cartoon.
• In 2002, Canadian rock band Volume created an album, The Amazing Spider-Band, that re-created key musical cues (including the theme song) as faithfully as possible to the original.[4]

You can now order The Vocal Chords’ from iTunes, Google Play, Amazon and BandCamp.

Buddy Holly, Elvis, Beatles, Johnny Cash, The Shadows, Pink Floyd, Bob Dylan, Peter, Paul and Mary, Peter and Gordon, Nina Simone, The Kingston Trio, The Mamas and the Papas, and many others are our sources of inspiration.

We hope you will enjoy the music and share it with your friends, family and Playlists!

Visit their site at: www.CudChewingCows.com

Even more info at: www.spaceviz.com

Spider-Man, Spider-Man,
Does whatever a spider can.
Spins a web, any size.
Catches thieves just like flies.
Look out! Here comes the Spider-Man!

Is he strong? Listen, bud.
He's got radioactive blood.
Can he swing from a thread?
Take a look overhead.
Hey there! There goes the Spider-Man!

In the chill of night,
At the scene of the crime,
Like a streak of light,
He arrives just in time.

Spider-Man, Spider-Man,
Friendly neighbourhood Spider-Man!
Wealth and fame? He's ignored.
Action is his reward!
To him, life is a great big bang-up.
Wherever there's a hang-up,
You'll find the Spider-Man!